Temmerman confectionery was founded in Ghent in 1904 by Bertha Moffaert and her husband. Specializing in the production of classic gingerbreads, the couple decided to open the first confectionary shop in the heart of Ghent on the corner of the Lammerstraat next to the  Genste Vooruit.

The business flourished and became a real established name in Ghent when Francine and Jacques Temmerman runed the business. Fresh sweets were made daily, including the famous Ghent Cuberdon, with a small production workshop in the basement of the store, where more than 16 employees worked at its peak.

Following the death of Jacques Temmerman, the business came into the hands of his children who expanded the business further with several stores in France and Belgium, including a store in Aalst.

In 2003 it was decided to sell the business, with the exception of the store on the Kraanlei in Ghent, which has always remained in the hands of the family. The then manager, Francis Temmerman, son of Jacques Temmerman, wanted to give his children the freedom to build their own career.

However, the apple doesn’t fall far from the three, as in 2018 the youngest generation Temmermans has retaken over the Temmerman Confiserie brand. With still the old shop in family hands, they opened a new branch in the center of Aalst. This time in the historic building in the Molenstraat.

The store on the Kraanlei, which has always remained in family trade, and the store in Aalst, are now accompanied by a few new branches abroad.

Temmerman confectionery has specialized in confectionery, biscuit, tea and gift packages for years. Recently we have also been producing a small but refined range of pralines and other chocolate treats.

Traditional recipes, the quality of the ingredients and the passion for the products have been central for more than 4 generations. When people talk about Temmerman, they also refer to the grandmother of candy shops. In Aalst there are more than 140 different sweets, all of which are still made according to the traditional recipe. The choice of ingredients is essential: for the production of the gums, instead of gelatin, gum arabic from the arcadia tree is used. The attention to detail has never disappeared over the years. For example, the cuberdons do not have the classic cone shape, but they are made in the form of a mask, which is an ingenious way to create extra surface so that sugar can be prevented.

This principle of production applies to all Temmerman products. Our classic gingerbreads are still made in small workshops according to the original recipe from 1904 with real honey. We also have an offer of sixty high quality loose tea.

The wide variety of different products makes it ideal to compose a gift package. The smuggling boxes, the spiced gingerbread and the candy towers are not only the perfect gift, but also belong on a beautiful festive table.

Our products
Our shops 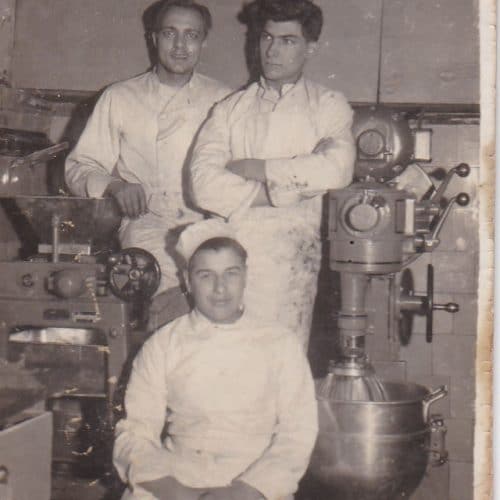 Confiserie Temmerman is a household name in Ghent for delicious old-fashioned sweets and Ghent delicacies such as mokken, buttons, sourballs and cuberdons.
Visit Gent